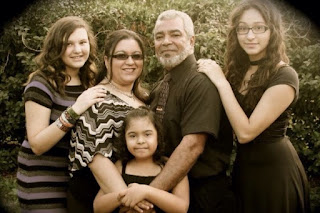 This is our story... it began 13 years ago.  Manny was working in Kendal Toyota as an automotive technician.  I came in for an interview.  He was the first person I saw when I came in the building, he was crossing the lobby, looked at me over his shoulder and made a u-turn to come speak to me.  I was a single mother of two little girls and I was so hesitant to move into a new relationship.  Manny instinctively understood that and began to slowly court me.  Six months after becoming friends, I accepted an invitation to dinner.  We have been inseparable since!

Manny had three adult children, Manny Jr., Fatima, and Angie, from his first marriage, and his ex-girlfriend's son which he raised, Jason.  As I mentioned already, I had my two girls, Yudith and Aly.  We blended our families and added a 7th when Rebeka was born.  We love all of them equally, we don't deal with halves or steps around here.  In addition to the 7 "kids" there are 8, soon to be 9 grandkids: Julian, Serena, Isaiah, Alex, Olyvia, Ricky, Max, and Julius.

I always knew I was meant to adopt.  It was a calling I felt might never come true.  Manny hesitated and struggled with the thought initially.  Especially when I told him God wanted us to adopt a child like Becky.  Rebeka was born with Down Syndrome and Congenital Heart Disease.  She flat lined three times in the first week, and several times in the first month.  She was in NICU for 38 days, then was in and out of the hospital for the first 5 years of her life.  When she was 3 months old she had open heart surgery to repair three huge holes in her heart.  She had chronic asthma and had several surgeries for her ears.  Manny was worried we wouldn't be able to cope with two children with special needs.  Over the years, Becky's health has stabilized and the conversation of adoption kept resurfacing and we kept praying and waiting.

The dynamic in our household is unique to what both of us knew as "normal" from our previous marriages and relationships.  For starters, we've both given our lives to Jesus and that has made a massive impact in our lives.  We have learned to value people and circumstances that we didn't value before or didn't appreciate.  The worst enemy anyone can have is complacency.  Being ok with the way things are.  We have learned to analyze where we want change, determine how to bring about that change and to just "DO" to bring the change.   We learned to stop fearing the unknown because God is already there!  We decided to step out in obedience in several areas of our lives and we tasted His favor.
Like I said, the subject of adoption kept coming up.  I learned about Reece's Rainbow through a friend that adopted three boys with Downs from Ukraine.  I kept showing Manny the kid's pictures on Reece's Rainbow!  I was praying about the day that he would say ok. Manny kept saying, it’s not time, one day, “I’ll pray their families find them.” One night a friend posted a picture of a gorgeous girl on RR. One look at the picture and her story, the tears started flowing. The next day Manny wanted to know when we could “go get our girl!”
This is how the Fleites family found Jenny. Her smile grabbed at our hearts. We decided to keep on praying and take the chance. She gave us the courage to jump right in and obey!  If God meant it to be our path, it would happen. And happen it did!
Jenny, soon to be Lucy, has no other known medical concerns. She lives with foster parents and seems happy and cheerful. In videos, she is always smiling, singing and dancing. Her family is anxious to have her home! Her room is prepared, her siblings are ready to spoil her, and her parents are counting down the days.
Every step has been slow and steady. Every financial deadline has been a testament to God’s faithfulness. Almost every step has been fully paid with donations so far. The blessings keep coming!
We have met so many amazing people that have been on this journey. So many people impacted by adoption.  They have given us hope!
We still have $15,500 to go, but the burning desire to bring our daughter home keeps us going!
We are very grateful for the support received and thank you in advance for your future contributions! We covet your prayers and for you to share our story!  Lucy will change lives, but we have to get the word out there first!  Please introduce our girl to those you know!